That slender white concrete tower standing like a sentinel overlooking the City of San Francisco from the top of Telegraph Hill? That unmistakable landmark is Coit Tower, and it has been a part of San Francisco's skyline since 1933. It was named after Lillie Hitchcock Coit, a wealthy resident who, upon her death in 1929, left a substantial bequest “for the purpose of adding to the beauty of the city [she has] always loved". Visitors can take the elevator to the observation deck to enjoy 360 degree views of the city and bay, and take in the murals painted by local artists in the 1930's in the tower's base. 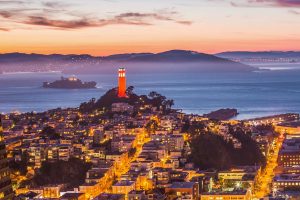